Skip to content
You are Here
The Gold Needles – What’s Tomorrow Ever Done For
You? 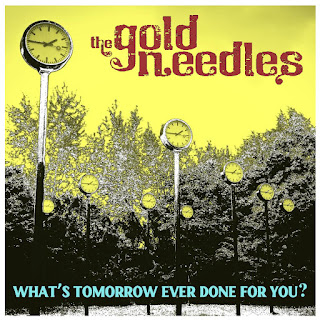 Another in a string of truly excellent albums to be released in early 2021 is the third LP from Hull, U.K.’s The Gold Needles. Out on JEM Records, What’s Tomorrow Ever Done For You? follows up 2019’s acclaimed release Through A Window. The Gold Needles are very typical of the talent on the JEM roster right now in the respect that their sound is grounded in a timeless devotion to melody. You can hear obvious influences from the ’60s — but probably just as many from the ’70s and ’80s. The band — made up of Simon Dowson (guitar), Dave Burbage (guitar, keyboards), Mark English (keyboards), and Carl Slaughter (bass) — recorded What’s Tomorrow Ever Done For You? while under COVID lockdown last year.

Across 12 tracks, What’s Tomorrow Ever Done For You? explores numerous musical styles falling under the larger umbrella of psychedelic pop. If you just heard the title track and noted that the album features covers of The Hollies’ “Have You Ever Loved Somebody?” and The Beatles’ “If I Needed Someone”, you might assume that The Gold Needles have taken up permanent residence in the mid-to-late ’60s. But while the Byrds-like majesty of “What’s Tomorrow Ever Done For You?” is a true pleasure to behold, it’s just one facet of the musical experience The Gold Needles have in store for us. The band proves just as comfortable occupying the lane of psych-tinged post-punk/new wave on the brilliant “I Get The Pressure” and a fine cover of The Sound’s “Counting The Days”. Elsewhere, the band rocks out on “Susie Is Sorted (She Doesn’t Care)”, channels early ’80s FM power pop on “The Story of My Life”, and travels to the darker realms of prog rock on “Realm of the Black Dog”. It’s an eclectic mix of songs for sure, yet it’s tied together nicely by the band’s penchant for beautifully-crafted melodies and  splendidly-executed harmonies. This is simply a class effort from a class band. “What’s Tomorrow Ever Done For You?” and “I Get The Pressure” is an opening 1-2 punch to die for. “Billy Liar” might have the catchiest chorus of any song this year. And while three cover tunes might seem like a lot for one album, they are all fantastically suited to this particular set of songs. I had to admit I was slightly skeptical when I read a list of the album’s influences including The Moody Blues, Asia, and the Beach Boys. But now that I’ve heard the album, it actually makes perfect sense! Another big winner from JEM!
-L.R.